By continuing your visit to this site, you accept the use of cookies. These ensure the smooth running of our services. Learn more.

Yesterday as therapy session with my 3-year old client diagnosed with Attention Deficit Hyperactivity Disorder (ADHD) with accompanying speech and language deficits was just about to start, the parent of my kid from the previous session just arrived and I had to give her feedback on how her child performed during our session.
So before heading out of the therapy room to talk with my other kid's mom at the reception area I told my kid with ADHD:
"I will go outside for a while, okay? But while I'm out I want you to stay seated and keep quiet inside. Don't go outside the room and don't grab anything."
Then while he was seated in front of the table I left him something to monitor his behavior.
"Look, I will leave you this paper. It has a big face on it. But it doesn't have a mouth yet. Later when I get back and I see that you're still sitting down and quiet, I will draw a smile on its face. But if you don't follow, I'll draw a sad face instead, okay?" And he nodded.

So while I was out discussing with the mom of my other kid, of course I'm still a bit weary with how the other kid is doing inside the room with no one and without anything to do - and with just a drawing of a circle and two-dot eyes to oversee him. Even though I had asked another colleague to keep an eye on him from afar in case he wander around, this is going to be a big test for his impulse control and I was wondering if he can make it through. But I wouldn't be surprised if I get back inside the room with all the toys scatterred all around or worse, he has gone outside the room and has ran towards me because he couldn't wait that long. I've seen this kid for only three sessions prior and he was really really hyperactive and impulsive during the initial evaluation.

After 5 minutes or so, I went back inside the room and found him just quietly sitting and looking at the face I had drawn. Everything is in its place and there's not a single mess or clutter that's not already been there. I've done this smiley test technique I invented myself a couple of times before and it still surprises me how it works each time. As a reward, I drew him the well-deserved smiley face he had patiently waited for. 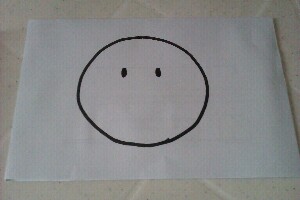 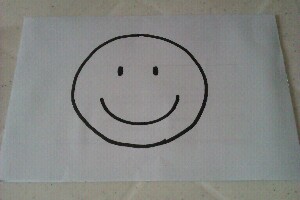 It has always amused me how the smiley face affects us in so many ways. We feel like a single text message when ended with a smiley face is more sincere. A statement written with an accompanying smiley face suddenly becomes positive and encouraging. The use of smiley face has also proven really useful in Occupational Therapy as positive reinforcement, not just for toddlers but for school-aged children as well; not just for children diagnosed with developmental or behavioral conditions but even with regular or normally developing kids.

According to Cecil Adams (1993), the ubiquitous "smiley face" we know - two-dot eyes, and an upward curve on a yellow circle was originally invented by Harvey R. Ball in Worcester, Massachusetts around 1963 to boost the morale of their workers after the merging of two companies. It was a big hit then and the fad lasted for a year or so. Up to this date, we still see commercialized smiley faces, some like exact replica, and others of some various derivatives.

At therapy sessions, kids go gaga over smiley faces. Even the most hyperactive and defiant kid would give anything just to be rewarded with a smiley face. So, how can the iconic silly-looking yellow-faced grin have such a powerful effect?

Dating as far back as in the olden days, we've always associated a smile as something positive. We feel happy, recognized, appreciated or at times, special and important, whenever we receive one.
Throughout life, we've always worked hard for a smile. We feel all giddy when our crush smiles back at us. We feel good when someone shots us a full-faced grin. Even when traveling in a strange place, when you smile at a stranger they automatically smile back at you and thus breaking the ice or any cultural barrier there is. Later on, the smile just evolves into a pat on the back, a high five, words of affirmation, or tangible gifts.

According to an article entitled: "Why do we smile?", babies usually start smiling, blinking and crying as early as the 26th week inside the womb but after birth, infants wouldn't smile until they are 6 weeks old - after they have finally adjusted with the difference in environment outside. This further suggests that smiling is a reflex to positive feelings - of happiness, stability and security.

Later on a child begins his early cognitive development in dichotomy. He only recognizes good and bad, pretty and ugly before he begins to understand gray areas. This somehow explains why more often that not we find babies staring or smiling at more pleasant-looking people and crying at less good-looking people for no apparent reasons.

But a "smiley face", as we know, is not real and nothing but a mere representation of anything positive. Scientists have long been studying about the different biological processes related to specific social events - and one of particular interest is that of Guillaume Benjamin Amand Duchenne, otherwise known as Duchenne de Boulogne, a French neurologist who coined the term "genuine smile" or the "Duchenne smile." According to Duchenne, a smile is activated by contractions of various muscles of the face such as the zygomaticus major and orbicularis oculi pars orbitalis. When the zygomaticus major or the muscles at the corners of our mouth contracts, it forms what we call "Pan American smile" or the social smile (see A, image below). When the orbicularis oculi or the muscles around our eyes contracts along with the zygomaticus major then it forms the "Duchenne smile" or the "genuine smile" (see B, image below). Duchenne reiterated that "mouth corners" only smiles are fake and a real smile should involve the eye sockets and mouth corners muscles. A genuine smile is believed to be produced as a result of a positive genuine emotion and is primarily involuntary whereas a Pan American smile is partly voluntary. 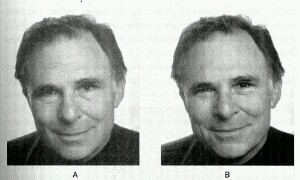 Bottomline is: a real smile or not, a visual representation or a face-to-face interaction, a smile is perceived by the brain as something positive. Not only does it make us feel good when we're the one at the receiving end, it also makes us look good when we're the one smiling at others. Smiling also contributes to the general well-being of a person as numerous studies have already proven that those who smiles more live the longest. So make it a habit. After all, it's free. :) 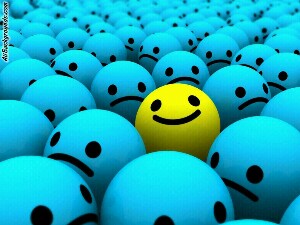 "The science of smiling." (2013). Retrieved on August 14, 2013. Http://blog.bufferapp.com/the-science-of-smiling-a-guide-to-humans-most-powerful-gesture